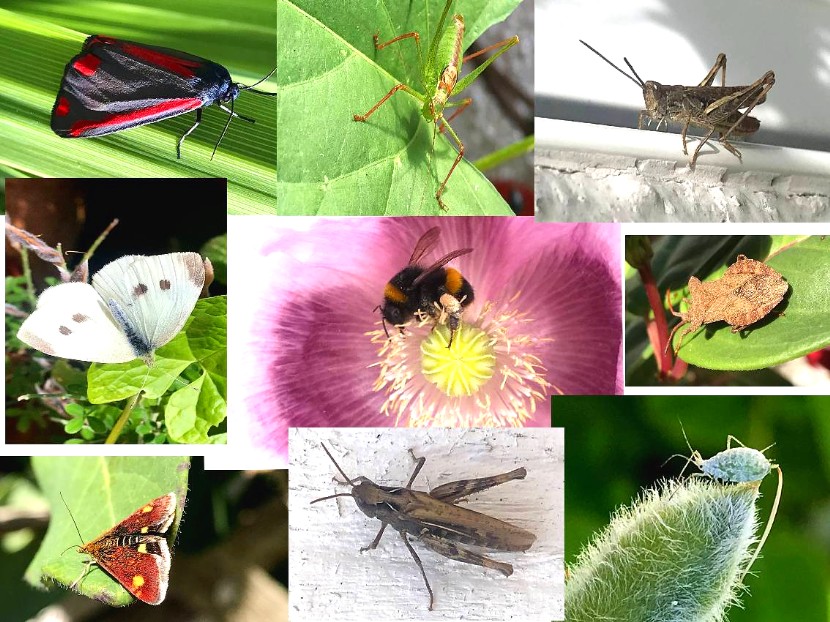 Here is a picture of some of the many insects which have been photographed in the Garden. Can you identify them?
While all organisms in the ecosystem are essential the role played by insects is particularly vital. They are under-appreciated and often viewed as a nuisance.
Insects are responsible for the pollination of about 80% of plants which invest significant amounts of energy in the formation of attractive blooms full of nectar primarily to attract them. Bees are the most important pollinators in the ecosystem.
Insects also help in seed dispersal in more than 150 species of plants, ants playing a crucial role in this process. Decomposition of animal and plant matter is another vital role that insects play. They can help in the removal of disease-causing organisms and breakdown of livestock dung enabling the release of useful nutients for growing plants. Nutrition to other animals including humans is also provided by insects. The diet of many birds is dependant on insects as is that of numbers of vertebrates incuding frogs, mice and bats.
Insect consumption is becoming increasingly popular around the world. Insects produce protein more effeciently than cattle. Replacing proteins produced by vertebrates with insect protein is likely to reduce greenhouse gas emissions significantly.
Some experts predict that insect protein could be an essential food for the future.
Insects in the Garden are not a significant problem and very many are attractive as the photograph shows, and should be regarded as friends. Caterpillars sometimes attack the vegetables and greenfly and blackfly can be a nuisance but we have never needed an insecticide for control.
Since before 2000 BC humans have used pesticides to protect their crops. The first known one is sulphur which is still used in organic gardening today. By the 17th century science had advanced and nicotine sulphate was extracted from tobacco leaves for use as an insecticide and used in gardens.
So please enjoy and respect the insects in the Garden. Even wasps, though annoying, are useful and remember that that big  hungry caterpillar might just turn into a beautiful butterfly
Home Page | Stop Press | History | Visitor Information | Map of the garden | Garden Shop | Volunteering | Plant of the Month | Friend or Foe | Plant Recognition | Herbs A-Z | Know your herbs | Learn More | Garden News | Events | Friend's News | Contact us | Become a Friend | Picture Gallery | General Site Map
Copyright 2015. All rights reserved.
Back to content | Back to main menu