Good News of Country Gardener
The March edition of the new look of The Hampshire Country Gardener, with its cheerful spring cover has now been published and is available from the Physic Garden.  It may then be collected from the office or when this is closed from the rack in the archway. The new larger size magazine is proving popular with its 40 colourful pages packed with interesting articles, photos and good advice. Topics include articles on the inside story of composting, growing perfect tomatoes and robot mowers.  With its collections of regular features, good advice, readers's letters and Hampshire events it makes an excellent read.
This is a free magazine which is now printed in Somerset and covers five areas Devon, Dorset, Somerset, The Cotswolds and Hampshire. Due to the coronavirus pandemic publication of the magazine has changed.  The publication which aims to give quality information about gardening and garden events in and around the area covers is an essential read for enthusiastic gardeners. 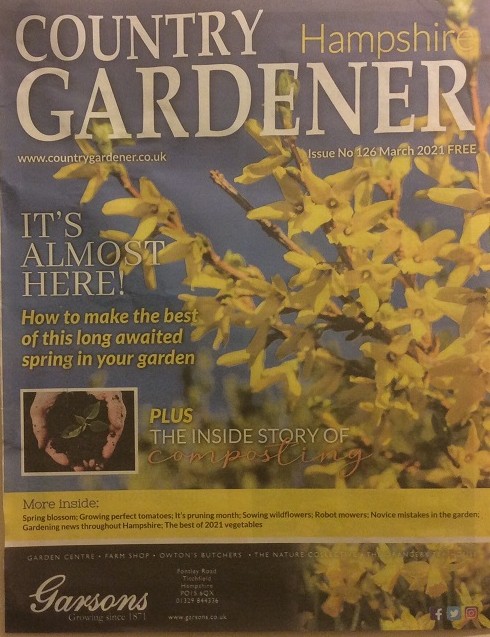 Farewell to peace – the Car Spa is here to stay.
Those of you who have been able to visit the Garden during lock down will have enjoyed it in peace and quiet as the noisy Car Spa just behind the Garden has not been allowed to operate. Alas that happy state will not last long. When some kind of normality returns the Car Spa will re-open with its noisy pressure washers and glare from its lights.
When the Car Spa was due to open  I was reliably informed by Councillors that it would be subject to a Noise Management plan and furthermore the licence to use the land for a car wash would initially only be granted for a 2 year period.
I am sorry to tell you that neither of these conditions has been met. I have now, after much effort, obtained a copy of the lease (dated 22nd September) which has no noise restrictions within it and is for a period of fifteen years. The Council must have been aware of these facts but nevertheless saw fit to issue a public statement in the Petersfield Post on November 11th that:
It has measures to prevent noise nuisance, and noise from it isn’t intrusive in the garden.
Even though at that stage the lease had been signed – without any of the promised restrictions on noise. As for the idea that noise from it isn’t intrusive in the garden one can only wonder on what basis they made that statement. It isn’t what most people feel.
Rodney Clark
Jenny Hill Lecture - Petersfield Physic Garden
Jenny Hill's recent Zoom lecture about the Garden on behalf of the Hampshire Gardens Trust met with an enthusiastic audience with over 60 people logging in
Jenny Hill is the Garden Manager of the Petersfield Physic Garden and has been a volunteer working in the Garden for the past 15 years. She has a very good knowledge of the history of the Garden and of the plants growing in it.
She is an experienced speaker and was able to reveal many of the little known aspects of the Garden and especially the mediaeval aspects of the herb usage a subject in which she specialises.
Country Farmers Showdown - BBC Programme
A repeat of the Country Farmers Showdown may be viewed on BBC iPlayer (19th January). The programme largely focusses on the Petersfield Farmers's Market but has a short look round the Physic Garden. The article below tells the tale of the filming:
A sunny Sunday September afternoon saw the Garden hosting Diccon Green and his team filming for an edition of the 5th series of the BBC programme 'The Farmer's Country Showdown'. The team were in Petersfield primarily to film the Farmer's Market and cited the Physic Garden as an additional place of interest to provide a little feature which the producers call 'the breakout story'. Having had advanced warning of the event the gardeners had been very busy tidyng the Garden so it looked immaculate for the event.
The photoraph shows Jenny Hill, the Garden manager being interviewed for the programme. 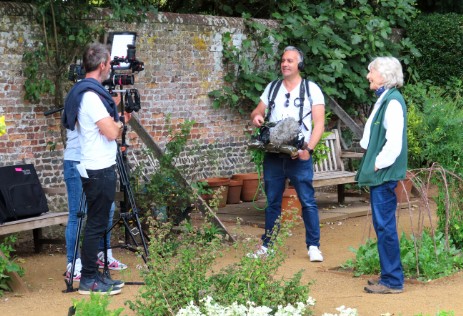 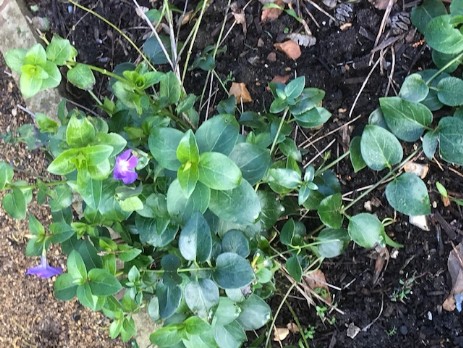 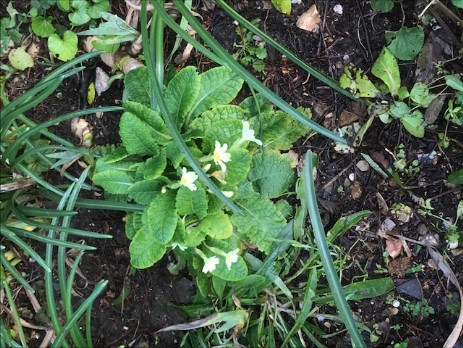 Petersfield Physic Garden features in recent edition of Pro Landscaper Magazine
Garden manager Jenny Hill was interviewed recently by Rachael Forsyth of the Pro Landscaper Magazine to fill an article centered on the history and aims of the Garden featuring many of the herbs that are grown in it. The article also covered many of the historical cures to which the plants had been applied but not, she stressed, recommended for modern use. It mentioned too, recent research which was being used to investigate a possible cure for COVID-19 in Artemisia, a herb grown in the Garden. This attracted interest as it has been used in Madagascar to combat the virus previously having for many years been used to treat malaria.
Pro Landscaper is a monthly print magazine which is published for the horticultural industry. It covers a very wide variety of topics associated with gardens to showcase the entire UK landscaping market. The magazine is broken down into four main sections: Inform, Inspire, Nuture and Educate to provide essential information for the landscaping community. The article on the Physic Garden fell into the Nuture category. 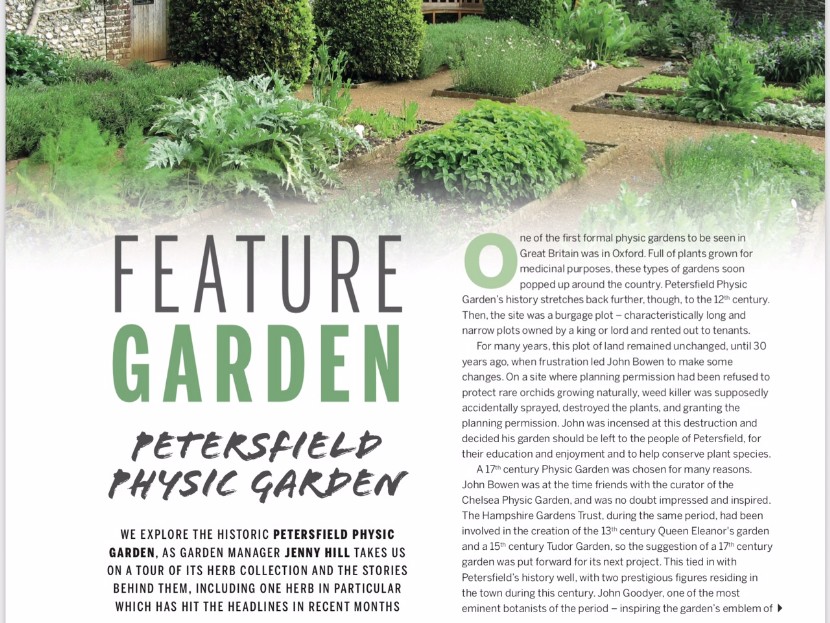 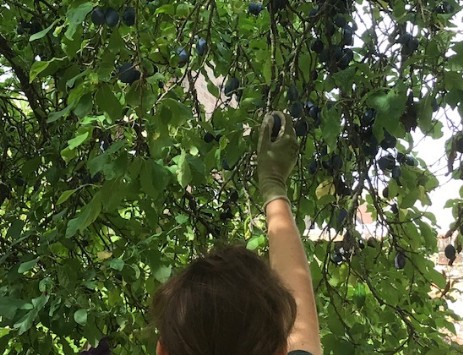 The damson tree had a very good crop of fruit this year and the picture demonstrates that it was all hands to the task to collect the fruit before the next storm did so for us.
Damsons offered for sale were very quickly snapped up by visitors but volunteer cooks have been busy with the remainder of the fruit turning it into jams and jellies. These will be available from the office with a selection of other home made jams and chutneys now that it is open. See Garden Shop
Can you find any Chinese Lantern plants in the Garden? 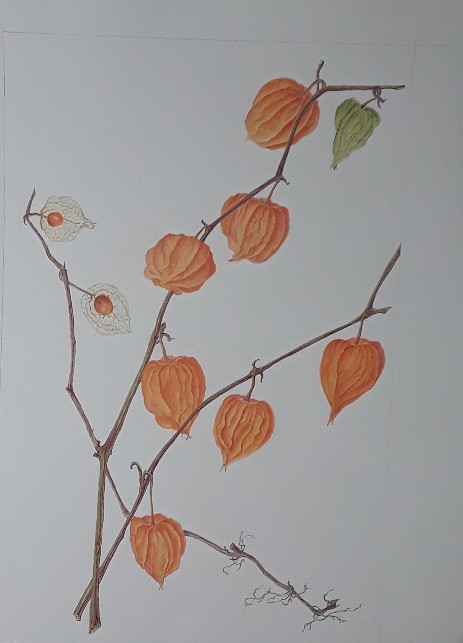 Now that there is more freedom to come into the Garden Pauline Elkins our artist in residence is providing the opportunity to help visitors to identify the plant. Using a number of coloured pencils Pauline has drawn a detailed picture of the fruits of Physalis alkekengi or as it is commonly called Chinese or Japanese lantern or rather less romantically bladder cherry.
This species is native to Asia unlike the rest of Physalis that is native to the Americas. It is easily identifiable by the large,bright orange to red papery covering over its fruit, which resembles paper lanterns.
In Japan its bright lantern-like fruiting calyces form a traditional part of the Bon Festival as offerings intended to help the souls of the dead. In this country it is often dried and used as a decoration for all halloween. 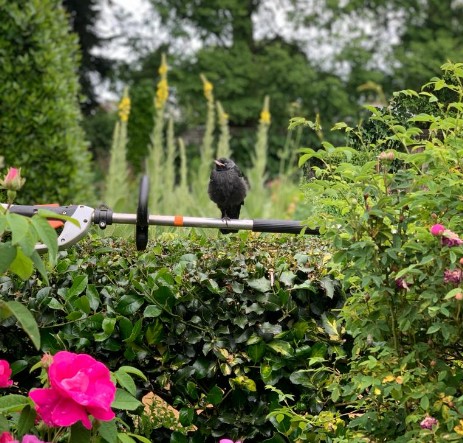 The Garden shows support for the NHS
Volunteer gardeners have been busy behind the locked gates of the Physic Garden to keep it well watered and trim in prparation for when it will be open again to the public.
Adrian Milmer gave the entrance drive a power wash before iniating the drawing to express our thanks to the NHS and all the other key workers for all they do during this pandemic.
Activity in the closed Garden
Whilst the Garden has been closed during lockdown nature has been making the most of the opportunity to florish.
This young jackdaw is very obviously put out by the noisy power tool and is indicating that he would rather it wasn't used!
See Garden News for more photographs 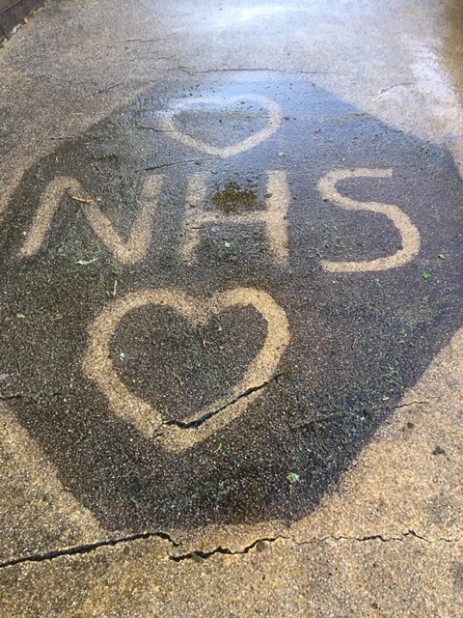 Petersfield Community Radio visits the Garden  - January 2020
Jenny and Claire during the recording session
The Physic Garden was invited to host Petersfield Community Radio group in the recording of one of their weekly podcasts. In this edition Jenny Hill, Garden Manager can be heard speaking about the Garden in an interview with Claire Vennis to produce the P pod podcast. This can be heard by following the link below. 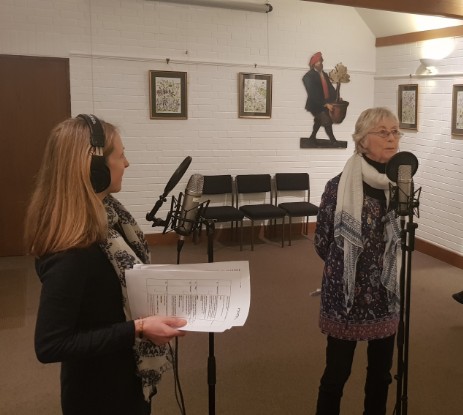